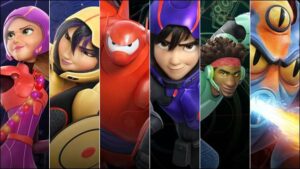 So we’re assuming there will indeed be a sequel to it one day, because according to comicbook.com, Big Hero 6 is now the third biggest grossing animated film, passing up Beauty and the Beast. #1 is The Lion King, and Frozen is right behind at #2.

Director Chris Williams told Variety the key to the movie’s success is the relationship between Hiro, the lead kid, and Baymax the robot. “The movie centers on loss, and so we all talked about our own experiences. We made ourselves vulnerable once the doors were closed, when we were in the sacred space of the storyroom.”

As far as a sequel goes, co-director Don Hall told Creative Screenwriting, “We’ll see. We just finished this one, and the truth is, we’re exhausted from the ordeal of making it. It was really fun, but it was long hours, and it was pretty intense. It’s a pretty emotional time for us. These are characters that we’ve grown to know very well, now it’s time to let go of them, and they’re going into the world without us. We’re in the middle of that phase. So we haven’t talked about or thought about any sequels or anything like that. Having said that, of course, we love these characters, and the thought of working with them again some day definitely has its appeal.”

Williams and Hall also trying to follow one of John Lasseter’s rules of Pixar, which actually got broken at least once, but anyways, it’s “No sequel will ever get made unless the directors want one and feel strongly that there is a story that needs to be told.” Considering I got a kick out of Big Hero 6, I’m hoping there will indeed be more to come.