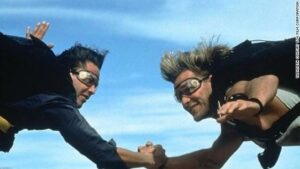 Some time ago, it was reported there would be a remake of Point Break, which wasn’t the greatest movie in the world, but it was a lot of fun, and one of those movies you get addicted to from constant showings on cable.

It’s going to be a bit bizarre watching a Point Break remake, because the original was unintentionally funny, especially with Keanu’s terrible performance, and if this one’s going to play it straight, it’s probably going to wind up just like any other crime film, and what’s the fun of that?

Plus, do they really want to go up against Star Wars? Yet as an executive for Alcon Entertainment, the company producing the film, told Variety, “With Christmas on a Friday this year, the reality is that there’s room for multiple movies. Our film is a really fun mainstream movie.” There’s a number of other movies coming that X-mas as well including Monster Trucks, and the Jennifer Lawrence / David O. Russell movie Joy, a biopic about the woman who invented the Miracle Mop.