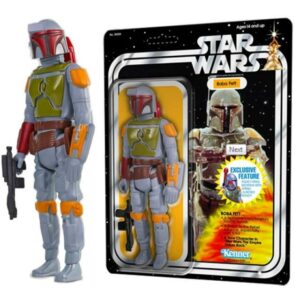 Okay, so you didn’t save your Star Wars toys in the original packaging, we understand. You didn’t think about a future investment, you just wanted to play Star Wars with your friends and have fun.

So now a lot of us have to be kicking ourselves, because Bloomberg reports that one collector sold his still wrapped Star Wars figures in England, and the auction brought in $63,209 in three hours. The most paid for one figure? The Kenner Boba Fett, which sold for $27,221 (!).

The collection belonged to Craig Stevens, who used to be the chairman of the UK Star Wars Fan Club, and he indeed had a little bit of sellers remorse, telling Bloomberg, “It [was] terribly heart wrenching to see my items sold.”

I’m sure quite a few Star Wars fans figured that one day we’d be able to buy back all the cool stuff we sold off, gave away, or actually (gasp!) opened up and played with, except it’s now pretty obvious we’ve got a long ways to go before we can afford to get back a lot of it, and prices should only go further through the roof with The Force Awakens coming in December.

Binge Watching Could Be Hazardous to Your Health