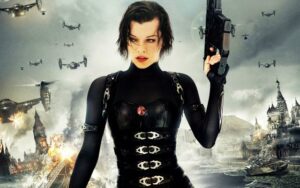 We certainly have to thank Resident Evil for being one of the first, if not the first, undead video game. The movie adaptations however, well, nobody’s saying thanks for those…

There’s a lot of haters out there for the Resident Evil movies, but every time one comes out, nobody stays away in droves. In fact, they continue to make big bucks, no more how dreadful the final product.

Now the news has hit that the next one will be The Final Chapter, but you wonder, because don’t forget there was a Final Chapter of Friday the 13th, then plenty more movies followed afterwards. Collider tells us that The Final Chapter will start shooting in August. The film was supposed to shoot last summer, but Milla Jovovich got pregnant, and will be giving birth in the spring.

The film is scheduled for release on September 2, 2016. So if you dig Resident Evil, there will indeed be another movie coming, and if you’re a hater, it may be the last one you’ll ever have to suffer through.

Microsoft Voldemort (Hololens) and Windows 10: The Super-Secret Product That Can’t Be Mentioned