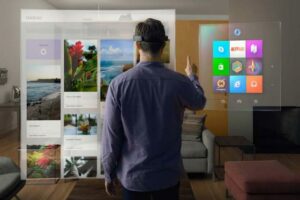 Today one of the best kept secrets in Microsoft was demonstrated inside the company I’m calling it Microsoft Voldemort because it is the project that was so secret it couldn’t be mentioned before now.  At the heart of this is holographic technology built into Windows 10 (Windows Holographic) which has broad implications for 3D scanning and printing but promises to create a reality that is similar to one of the visions HP had nearly a decade ago but was unable to bring to market, true Augmented Reality (you may recall this video).  This technology comes the closest to providing something that is truly magical but I doubt any of us will see the true potential for several years so let’s explore that now.

When We Can Control Perception

We perceive the world mostly through our eyes and ears.  For some time we’ve been able to effectively alter what we hear and where the sounds come from allowing us to play games that have elements that appear to surround us while looking through a every higher resolution window into an imaginary world.

This move by Microsoft will allow us to do with sight what we once did with sound but go beyond 3D Virtual Reality to Augmented Reality.  Virtual Reality allows us to create fully imagined worlds that have no connection to the real world.  Augmented Reality’s promise like the film I linked to above showcases allows us to overlay the real with the virtual effectively changing how we perceive reality.

So what does this really mean?

Microsoft showcased several examples of how this could be initially used.  For instance you were doing a repair a remote technician seeing what you are seeing and able to alter what you see could verbally and visually guide you through a repair actually highlighting both what you needed to work on and use diagrams or drawings to walk you through what you need to do.  I know a certain Swedish build it yourself furniture seller whose customers would think they died and went to heaven if they got this feature.

They also showcased the JPL Labs Mars rover application that is letting scientists virtually walk on mars while still able to use their PC on the desk.  The remote Mars rover, moving on Mars, acts in concert to enhance the impression that you they are actually on the planet.

Finally they showcased Minecraft played using your own furniture floors and walls allowing you to change, open, or drill through these spaces to create magical worlds that appear real but only really exist in the mind of your Windows 10 PC.

Initially the technology will be showcased in a pair of very unique glasses that have built in transparent displays coupled with a Connect like 3D camera and a new processor that has never existed before that will work with the CPU and GPU to both create a virtual world and blend it with the real world.   In effect the glasses scan the world you see and then, in real time, alter what you see to create a very different world using a new application called HoloCreator.   While this sounds like something out of Mission Impossible, it will shortly be available to buy.

Let’s talk about what else you could do with this.

Initially this will allow you to do things like create a plan to remodel a home and then overlay the changes while you walk through your real home so that all your changes occur in the virtual world not the real one.   Having just done a remodel with lots of these changes the cost savings could easily pay for several of what is initially likely to be a relatively expensive pair of very unique glasses.

Now if everyone in a room has these glasses on you could have virtual outfits.  Imagine a Comic-Con where you looked like the real Batman or Wonder Woman, you could be dressed in clothing from any Star Trek era or had a little baby dragon sitting on your shoulder breathing fire and making rude gestures to your friends.

You could be taller, shorter, have any color hair and any length nose.  You could be your character from World of Warcraft or look exactly like Brad Pitt.  You could have a wand that appeared to actually work or even appear to teleport into the room though walking to the spot you teleported to you’d have to be aware that others wouldn’t see you and yes you could actually be invisible.

Granted everyone would have to be wearing the glasses but if you are creative, or simply wanted to have others create creative new worlds you could physically explore this eventually makes that possible.  The nice thing is that, unlike virtual reality, you can still interact with the real world because the headset is blending both so you can still work on your PC, you can still shake hands and kiss, and, I imagine, that folks will quickly figure out how this could do some interesting things for your sex life.

Years ago we saw Steve Jobs stand up with the iPad and call the device magical.  But when we can, with a gesture, change what is on our walls, what is on our bodies, move or physical location not only around the world but to new planets instantly, we are truly providing a magical experience.

The glasses initially will be expensive but costs tend to come down sharply over time and this same technology can be used to interface with every more capable 3D printers to move what we imagine from something that just looks real to something that is real.   Microsoft wrapped this technology with the most advanced holographic computer in the world and the real name for this product is Hololens but I’ll likely always think of it as Microsoft Voldemort because not only is it magical but for a long time it was the product in Microsoft so secret it couldn’t be mentioned.

Battery powered, with a unique holographic processor, and totally wireless (and decidedly better looking and far more capable than Google Glass) this has the potential to redefine how we interface with the world and computers and how computers interface with us.  Oh and this is just version one, what till you see version 2.

But wait there was much more.

This is something that was actually promised several years ago but is finally showing up in Windows 10.  You’ll be able to stream your Xbox games in your home to your Windows Tablets and PCs and play them with an Xbox controller.  In addition games increasingly run on both Windows 10 products and the Xbox team has pledged to treat Windows going forward as a peer device so you can increasingly play group games on any Windows device from the Xbox to a table and with DirectX 10 the same performance uses half the battery life extending your game playing on a mobile device by 2x.

Wrapping Up:  Other Stuff

Now there are a lot of other things in Windows 10 that others will cover like it is free if you are currently running Windows 7 or newer versions of Windows, it blends the best parts of Windows 7 and Windows 8 and gets rid of the annoying stuff, if will keep you far safer, and it shifts automatically between tablet and laptop mode for 2-in-1 PCs.  Oh and basic office comes in the product for free as well.    It supports universal apps, apps that run from phones to 85” conference systems.  The new picture app not only automatically corrects your photos to make them look better it creates automatic collections of themed pictures and eliminates duplicates.  For music you put your music onto One Drive and every play list you create is automatically copied to all your devices.  With People it more seamlessly blends SMS and Skype messaging so you can more quickly keep in touch with all of your voice challenged friends.  It has two browsers, one that looks to the past and one that looks to the future code named Spartan and these are just some of the highlights but being able to create solutions that change how we see the world that stands above everything else.

Let me leave you with something else the Hololens borrowed from the Scarlet Pimpernel in that the entire project was created in a secret lab placed in the basement of the Microsoft visitor’s center.   Maybe this is a bit more like the Batcave.  Holy crap Satya Nadella may be Batman.

Next Resident Evil is Being Billed as The Final Chapter