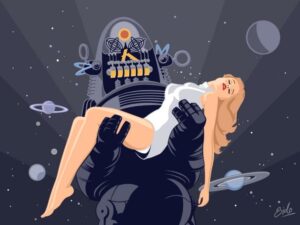 Okay, Lost in Space isn’t Star Trek, but man was it a fun show. As a big fan of Irwin Allen, I love his TV shows from the sixties like Space, The Time Tunnel, Voyage to the Bottom of the Sea, and the short-lived Land of the Giants. Lost in Space had great characters, and who could forget Robby the Robot telling us, “Warning! Warning!,” and “Danger Will Robinson!”

While 100 is a good long life, we’re still sorry to report that the creator of Robby, Robert Kinoshita, has now passed away at the century mark. He also gave us the robot from the sci-fi classic Forbidden Planet, which is still one of the greatest sci-fi movies ever made.

As the Hollywood Reporter tells us, Planet got a special Oscar nomination for special effects, and many consider it one of the first times a sci-fi movie was given the first class, big studio treatment. Kinoshita worked in the art department at 20th Century Fox, where Allen brought him aboard Lost in Space, and the rest is robot history.

While Robby may be crude by today’s FX standards, he had a great personality, and is one of the most legendary robots in sci-fi history. Our thanks to Robert Kinoshita for creating him, and may he rest in peace.

Transformers Age of Extinction Could Dominate the Razzies