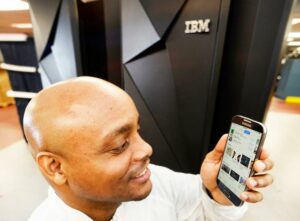 One of the things that is fascinating about the technology market is that things cycle.  What made the mainframe initially successful was the massive amount of I/O it could handle which remained largely unmatched even as technology advanced to client server.  This is because we didn’t seem to really need terminals anymore.  However with the rapid advancement of personal mobile connected devices like tablets and Smartphones coupled with advancements like 5G and Mu-MIMO there is suddenly a need for massive I/O and the Z13, IBM’s just announced mainframe, is uniquely suited for those tasks.  Suddenly the mainframe is cool again!

The reason that it makes sense to push to a mainframe architecture for tablet and Smartphone loads is that these devices are increasingly connected to ever faster services and, to preserve battery and assure security, much of the data and processing power has to be in the cloud.  If you look at Seri and Cortana these two differentiating services are hosted and don’t work if the device isn’t connected.

The two technologies that are and will be enabling this are Mu-MIMO which provides the equivalent of a gigabit switched Ethernet to connected devices and the coming 5G specification which builds on 4G for even higher bandwidth and reliability over WAN connections.   We suddenly have, or will have, the combination of a very fast network with the continued need shift performance off of the device to preserve battery life and make sure that if the device is lost it doesn’t compromise security.

IBM is really the only company that is capable of doing this because they maintained a focus in the mainframe space long after others had abandoned it and they don’t sell vapor.  For instance HP has recently announced both “The Machine” and a 3D Printer but has only been able to show models of what these systems might look like they haven’t been able to actually showcase a working product.  IBM can, because they always have, bring a product like this to market and assure it will work.

There is a common mistake that dominant vendors make when faced with a new and popular market condition and that is to panic and chase the new opportunity and forget that customers don’t like to change and that it is often easier for them and the vendor to just address the concerns as best as possible with the technology they already know.   This happened with the mainframe in the 1080s.

Back then client/server computing was hot even though a decade later most companies admitted the technology really didn’t work very well.  Most recently this happened between Microsoft and Apple’s IOS and that also resulted in the now obviously false “PC is dead” meme.   When your dominant and your solution still work it is far better to defend your technology rather than prematurely surrender.  Decades after the Mainframe was pronounced dead it remains one of IBM’s most successful products and for good reason.

In fact the reason why client/server was so attractive is similar to why users seem to prefer cloud services over IT resources.  It was because IT was hard to work with and the process to get to approval was and often remains difficult and complicated.  That’s an internal process issue and then as now has little to do with the technology.

With the Z13 IBM continues to showcase that mainframe not only still has utility but for these new loads it has a number of distinct advantages.

The time for a new mainframe architecture couldn’t be more ideal because our mobile devices are increasingly used like terminals with the processing centralized.  The mainframe has a competitive advantage because it is designed specifically for this kind of load and IBM is really the only mainframe OEM left in the market.  That is a perfect storm and what makes the Z13 Mainframe cool.

A Legendary Robot Creator Has Passed Away

Avatar Sequels Pushed Back a year