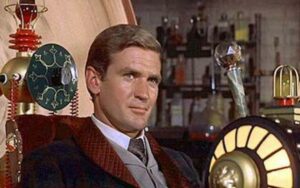 Longtime readers of TG know I’m a big fan of time travel stories, and one of the greatest ever is 1960’s The Time Machine, directed by George Pal. It’s a sci-fi classic that still holds up very well, and we recommend watching it again in memory of Rod Taylor, who passed away at the age of 84.

Taylor was from Australia, and in addition to starring in The Time Machine, he was also in The Birds, and ended his career playing Winston Churchill in Inglourious Basterds. Taylor acted in a number of movies and TV shows, but playing H.G. Wells in The Time Machine is his best known role.

The Time Machine was clearly the inspiration for one of my all-time time travel faves, Time After Time, and I wouldn’t be surprised if Robert Zemeckis and Bob Gale drew from it when creating Back to the Future.

In addition to great performances from Taylor, Sebastian Cabot, and Yvette Mimieux, The Time Machine also features terrific make-up from William Tuttle (those Morlocks still look cool), and cool stop motion animation as well. So we definitely recommend going back in time to 1960 to celebrate a great sci-fi classic, and the wonderful actor who starred in it.