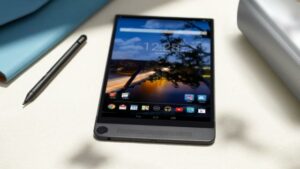 CES was an amazing show this year and there were a number of amazing things to look at.   In sitting back and looking at the big vendors that stood out a number came to mind for a variety of reasons.  Two surprised me though there really wasn’t much cell phone or tablet news at the event and PCs had the far larger presence.  Dell, HP, and Lenovo were all over the place.  I think this is largely because cell phones and tablets tend to peak in the late 3rd and 4th calendar quarter and few are ready to talk about new products this close to the end of the 4th quarter.  As a result PCs filled the gap and given the “death of the PC thing” has now largely been debunked these vendors came to play.

So PCs won out CES this year but there were a number of companies that clearly stood out from the crowd.

Intel had both the best booth and the best keynote.  The booth was a stunning showcase of a lot of the unusual things that are done with Intel technology and I particularly enjoyed that they had an entire area for little firms that likely couldn’t have afforded to come to CES otherwise.   It was really more about showcasing what could be done with the technology than how the technology worked and the booth was stunning to look at.

Their keynote was off the charts though.  It was professionally produced which stood in sharp contrast to others which ranged from executives that seemed focused on putting us to sleep, to those that refused to rehearse and lost the audience, to folks that thought we were there to see their ads.   Intel wove the products through the entertainment, kept a fast pace, and almost entirely used live demonstrations of things like autonomous and wearable drones, and sensors used by folks with impaired sight. They closed with a plea not to buy their products but for industry diversity.  They showcased their button sized Curie SOC which will likely have a massive impact on wearable devices over the next couple years and showcased they are serious, very serious, about this category.  It touched the mind and the heart and the folks that put this together along with Intel’s CEO Brian Krzanich deserve a standing ovation.

One of the major themes of the show was self-driving cars and while BMC initially and Mercedes eventually got the most related coverage for the demonstrations and design exorcises (the Mercedes model looked stunning).  It was NVIDIA that took the early technology lead with new platforms for both in car entertainment and self-driving.  As the car companies move into a much more technology rich area they will need a partner that doesn’t just toss parts over to them and then leaves the implementation to them, they’ll need a partner that can hold their hand through the process and NVIDIA was clearly tied to the majority of OEMs that were making a splash in the self-driving area of the show.

Just as NVIDIA had the hardware BlackBerry’s QNX division had the software and they announced they were already on a whopping 50M vehicles at the show.   But they weren’t just connected to self-driving cars this platform was all over Internet of Things solutions and while the show seemed divided between vendors who were active in one area or the other QNX appeared to be the only vendor equally powerful in both efforts.

Speaking of IOT (Internet of Things) Qualcomm’s AllSeen Alliance and AllPlay efforts were the most widely distributed.  I was specifically looking to see if any solution could match Sonos for distributed music in the home and Insteon for home automation and Qualcomm’s efforts made the grad.   With music and three partners you can now do what you can do with a Sonos system and Insteon signed on to AllSeen instantly closing that gap.   This was solid progress and I didn’t see any other single or group of vendors go as far.

One of the interesting things at the show was that Dell and Lenovo seemed to be aggressively positioning against each other and neither seemed to care that much about HP anymore.  But at the Intel Keynote the new Dell Venue 8 7000 with RealSense was the whole opening act.   They used this instead of a video camera to introduce and create the initial video effects.  The tablet had already won the “most innovative” award for the show and this cemented its place as the best tablet shown.  I understand a huge number of Intel employees rushed out and bought it when it hit the store shelves this month.

Speaking of tablets last year the one of the most interesting was the Panasonic ToughPad because it could survive even if you didn’t.  But there was a rumor that they would exit consumer electronics and this year they put that to bed with a vengeance.  They re-launched their Technics brand which meant a lot to me as that was what I mostly bought when I first got out of college.  They also had the best blend of consumer and business goods and their coolest product was a huge monitor that was imbedded in a glass wall that would be used for conference rooms.  It made it look like the display was floating in air, I’m already thinking about how I’d use this in my house.   In their booth they had a gorgeous Jaguar F-Type coupe, apparently they are a major part of the 2016 stereo system in that car.

After running into the Jaguar in the Panasonic booth I kept running into more of them.  Both Delco and Intel had them as well and only the T-Rex (a very unusual three wheeled high performance sports car) got anywhere near as much coverage.  As far as I could tell there wasn’t even an official Jaguar presence at the show.  Even in the NVIDIA video where they had their autonomous car drive through a virtual parking lot the thing seemed full of Jaguar F-Type coups.   I think Intel got it more right though as they had the convertible and with the convertible you could actually see the stereo inside the car without getting into it.  Intel was showcasing next generation eye tracking technology in the car (if the car knows where you are looking it knows to alert you to things you can’t see and can move the lights to better aluminate what you are looking at).  Cool tech.  Now you’d think I’d be pleased since I drive a Jaguar F-Type but the tech being showcased won’t be in my car and that didn’t make me particularly happy.

What this means is that by the end of 2015 a lot more of the electronics you buy will work together and be far better connected.  Self-Driving cars will more likely be on the roads in mass by 2018.  Panasonic is going to be a much stronger player going forward and you’ll see Technics on store shelves again this year.   And the must have tablet is the Dell Venue 8 7000 with the RealSense camera at least until Mobile World Congress in a few weeks.  Finally, given how Intel schooled everyone else at CES, I’m expecting a lot more great presentations at the show next year.   Oh, and with Curie, I’m also expecting a lot more interesting wearable devices as well.

The world’s greatest bathtub must be seen to be believed