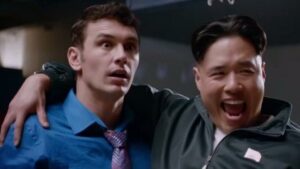 This is something that the major studios have been dreading for a long time…a big movie that could eschew theatrical release altogether. As we’ve written before here on TG, the hacking of Sony may have forced the hand of progress by putting The Interview online to avoid a terroristic act from hitting the nation’s theaters.

So as expected, The Interview is doing bang up business online, and it has been doing meh business theatrically. According to Time, it’s made $31 million in digital sales, and Sony may make its money back on the film very soon.

Time reports that theatrically The Interview made $5 million, a mere pittance, but the movie cost $44 million, and if online sales keep up at this pace, it could end up making the film a winner. (You wonder how the movie ultimately would have done if it hadn’t sparked an international incident, but if it was going to come and go within two weeks, this definitely turned out to be a blessing in disguise.)

As BuzzFeed points out, this is a “nightmare scenario” for exhibitors, because a movie will make more money in digital distribution than in its first run release, and this comes on the heels of reports that ticket sales have hit their lowest point in nineteen years. (Don’t worry, Avengers and Star Wars should pick up the slack.)

Set Your Calendar For Daredevil’s Debut