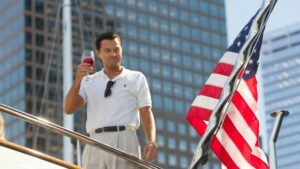 Whenever a movie looked good enough to check out, but not good enough to pay for a movie ticket, most people would chalk it up as a rental. Except in this day and age, why even pay NetFlix when you can just steal it?

So now that 2014 is behind us, there’s a list of the most pirated movies of the year, and number one on the list is The Wolf of Wall Street. Variety reports that Wolf tied with Frozen, which were both illegally downloaded about thirty million times.

Next up came RoboCop with 29.8 million downloads, Gravity, which was downloaded 29.4 million times, followed by The Hobbit: The Desolation of Smaug, which got 27.6 million downloads, and Thor: The Dark World (25.7 downloads.) Rounding out the top ten were Captain America: The Winter Soldier (25.6 million), The Legend of Hercules (25.1 million), X-Men: Days of Future Past (24.3 million), and 12 Years a Slave (23.6 million).

We have the feeling the top stolen movies of this year will include Star Wars and Avengers Age of Ultron, but we’re certain there will be as many security measures as possible to keep them from leaking. (Like we always like to joke, it will probably be easier to get access to missile launch codes, and maybe they’ll use the same kind of procedures that will keep missiles from flying around as well.)

Fifty Shades of Grey Gets the R Rating