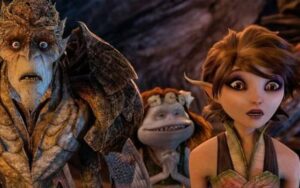 Okay, okay, we know Lucas bashing has been the geek national pastime since Episode One, but should we immediately dismiss anything his name is attached to? Well, his track record in the past hasn’t been great, Howard the Duck and Willow come to mind, but what about Strange Magic?

Strange Magic is apparently a computer animated fairy story that looks reminiscent of Epic, and Cinema Blend tells us it’s a take off on Shakespeeare’s A Midsummer Night’s Dream. As Blend reports, the film’s “press release promises goblins, elves, fairies and imps that will sing popular songs from the past few decades as they battle over a powerful potion.”

Wait a second, it’s a musical? According to Wikipedia it features “Stronger,” “Love is Strange,” and “Can’t Help Falling in Love.” (Not to mention the title is named after a great ELO song.)

How HP’s Turnaround Got Derailed