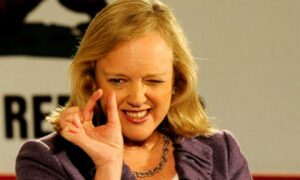 HP has begun to spiral and with the reversal of Whitman’s stated strategy to hold HP together and flip from using a build strategy consistent with her early background at eBay.  Her new strategy is now more consistent with one more closely connected to Bane & Company, where she worked before eBay, and focuses on keeping the financial analysts happy by making tactical moves to prop up the stock price for the firm by trading off its long term future and survival.  She is now less and less seen as a savior and more often connected to her failed predecessors.  This is not an uncommon problem and it showcases why Dell went private and why firms need to be led by subject matter experts and not treat CEOs as some kind of generic skill set.   We have recently seen this in spades at companies like Microsoft and Yahoo who both suffered under the leadership of qualified CEOs who really didn’t understand the respective firm’s business intimately, even though one of them actually helped found his company.

The problem likely began with Whitman’s selection.  She was on HP’s board and HP was faced with having to remove a second CEO over a short period of time and punted with Whitman who seemed willing to take the job on and did have a successful experience as CEO at eBay.  So the board in a panic punted with Whitman who had to look better than an empty chair but likely would not have been selected had there been time for a formal search simply because she didn’t have experience in any business that HP was currently in nor in running an company of HP’s size and scope and her failure in the California election showcased a stunning lack of strategic sense.  Punting with a CEO seldom works out well and this will likely be considered, in hind sight, a case in point.

Whitman got the job after losing a largely self-funded effort to become Governor of California.  Since she was in my own party and she had a technology background I covered this effort extensively at the time.  It started, after the primaries, being her election to use as her opponent, while more seasoned, was thought to be too old and just a tad crazy however he was also far more experienced.

Whitman who had won the primaries handily simply had to find a way to pivot from her right wing focus to a more centralist view and play on the nurturing advantage that every woman executive and candidate has by default.  She was handed this pivot in the form of a house keeper who had been with her for an extended period of time and was an illegal alien.  Showing compassion she could have become that housekeeper’s champion arguing she was like a member of the family and showcasing both the nurturing nature she had as an advantage, attracting the Hispanic vote (which often trends conservative anyway), and shifting to the middle.  Instead she fired her and attempted to blame her opponent for the problem which backfired badly making her look both heartless and disingenuous costing her the election.

This showcased two critical weaknesses an inability to think strategically and a lack of understanding for the power of perception critical to marketing execution and demand generation as well as winning elections.

Best practice in a turnaround is to do one layoff executed sharply (so that it doesn’t become yet another problem) early if a downsizing is needed and then focus the company on rebuilding and fixing the operational, image, and product problems while a vision is created to form the template for the firm’s future structure.  They also need to form a core team that is loyal to them and then execute.

Both Apple and IBM turnarounds which are showcases for how this is done confirm the success of this approach.   Whitman seemed unable to grasp the need to maintain image early on and marketing has been unusually weak particularly given beefing up this function was pivotal to both the IBM and Apple efforts so she has had difficulty communicating a companywide vision.  With an umbrella company the head of sales for the firm also plays a pivotal role in pulling the firm together into a synergistic whole and that role appears unfilled.  Common feedback was and remains that HP has solutions but generally sells parts instead because there is no one to force the solution approach.

Layoffs have been relatively frequent and slowly executed and Whitman’s core team has largely been fluid with most of the executives she showcased early on now working for other firms or moved out of their key positions.

Finally on one critical issue, holding HP together, she flip flopped switching to a strategy more aligned with her failed predecessor and announced she was splitting up the company and putting most of the debt into the part she wouldn’t head.  This, just at a time when PCs are recovering strongly and the printing unit had a 3D printer to announce suggesting her earlier strategy was likely the right one.

When IBM spun out their PC Company to Lenovo they lost huge economies of scale not only with Intel processors but with all of the related components common to both servers and PCs.  The eventual end result is they had to spin out their x86 server business as well and double down on their Power Architecture forming an ARM like consortium to scale it up with some success.   HP will face a similar problem but they are phasing out Itanium, which turned out to be a failed attempt to create the next generation x86 platform, and their ARM effort is as yet not mature (and still largely untested).  They are also planning to launch a revolutionary part called a Memresistor and they are developing a special version of Linux to run on it but their failure with the Palm operating system suggests they lack the skill set to maintain their own platform let alone create one.  And capturing the needed developer talent will be very difficult.  Ideally they’d start with a virtualization product like VMware but that company belongs to a competitor and likely would be leery, given HP’s past execution, of committing resources to such a new and untested technology.

The end result is that is a very tight window HP could see its Itanium business collapse, its x86 business become unprofitable or uncompetitive, and facing massive twin startup costs for their ARM and Itanium efforts in a market known for avoiding new and largely untested technologies like the plague.  The probability that HP’s enterprise business could implode under that pressure early in 2016 is exceedingly high.

In the end Whitman doesn’t appear to have learned from her experience losing the California Elections or from the successes of Jobs at Apple and Gerstner at IBM.  She has shifted to a strategy more similar to her failed predecessors and even though HP argued successfully that IBM made a mistake spinning out their PC unit she has most recently embraced that strategy.  This all showcases that 2015 will be a very difficult year for the firm and that the necessary foundation for a turnaround has yet to be built.   As a result she has shifted to a strategy of keeping the financial analysts happy but that tactical approach will adversely impact HP’s capability over the near term future.  HP ends 2014 weaker and should end 2015 even more so as they lose the economies of scale that the PC division provides to the enterprise division.  But she should be able to hold if not build valuation for the near term unless investors take a longer view than they typically do.   In the end this showcases that subject matter expertise and relevant skills are critical to any job, particularly that of a CEO.

Will Howard Stern Stick Around?