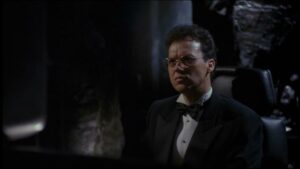 We’re big fans of Michael Keaton here on TG, and it’s great to see him back in action in Birdman. We’re also excited by the news of the possible reunion with him and Tim Burton for Beetlejuice 2, because they made a great team on the original ‘Juice, and of course, the first two Batman films.

When it was announced that Keaton would play Batman, and that there would be no Robin in the film, the fans were outraged, but Keaton silenced the doubters, and proved worthy of the cape and the cowl. Yet as he told Cinema Blend, he had his doubts about taking on the role, especially as he had to get into the suit.

As we’ve reported here before, Keaton got to try on the suit mere hours before production on the movie began, and all that hard, black rubber was hard to move around in. As he told Cinema Blend, “I was very claustrophobic. The first time I was locked in [to the outfit], I thought, This is never going to happen, I’m never gonna do it.’”

But as Blend continues, Keaton tapped into his fear about the role, and used the suit as a way of manifesting the isolation Bruce Wayne felt. “You become very interiorly isolated when you get locked into that thing.”

Batman was the first time that we know of when a hard rubber costume was used for superheroes, which is now the norm, although filmmakers have learned to make the costumers lighter, and actors have learned to live within them.

Do We Really Need Rambo 5?