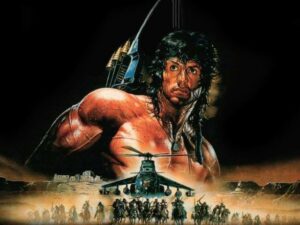 You have to admire Sly Stallone. The guy is certainly driven, and he doesn’t want to rest on his laurels, but should you really be doing another Rambo movie when you’re pushing 70?

Yet Collider tells us that he is indeed doing Rambo 5, and there will also be an Apollo Creed spin-off, named, you guessed it, Creed, where Apollo’s son will inherit the business and become a great fighter some day. (Michael B. Jordan is playing the son of Creed.)

Apparently the next Rambo flick will be called Last Blood, but like Friday the 13th: The Final Chapter, we have the feeling there will be more Rambos down the line. The good news is after these flicks, Stallone will be making a movie about a mob hitman, Scarpa, with a screenplay by Nicholas Pileggi, the man who gave us GoodFellas and Casino.

Some time back we reported on the comeback of the Rambo video games, and it’s fine to have him alive in that world. There’s just times we see Stallone running around with that bandana and a flame thrower and think, Come on, aren’t you a little old for that?

Last Ghostbusters Story of the Year

Michael Keaton Was Apprehensive About Batman