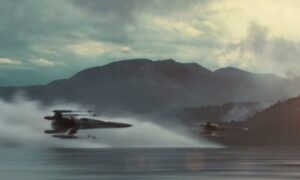 Star Wars The Force Awakens is less than a year away now, which means you know rumors and internet reports are going to fly fast and furious. We’re certain that everyone involved will be under gag order not to talk about what will certainly be the biggest movie of the year, but one of the stars of the film is claiming to the press that all the rumors are wrong.

As reported on Collider, Oscar Isaac, the brother stormtrooper you see in the trailer, who goes under the name Poe Dameron, has said, “I don’t think these little leaks necessarily ruined watching the trailer. And the [plot theories] that get formulated on these things – they couldn’t be more off-base.”

Isaac is also baffled as to why fans want to know so much in advance. “Me for I thought, Don’t you want to want to wait so you can get the real thing?” But he also acknowledged, “It creates excitement for it.” And of course, with so much anticipation, you know fans are going to be dying for the moment when something exiting is revealed.

As far as protecting spoilers, Issac says you have to read the script in a room with cameras, which is a technique we hadn’t heard of before, but we’re not surprised. We’re actually surprised they would even film somebody reading something, cause some techie would probably figure out how to blow up the frames and see what’s on the page.

Michael Keaton Was Apprehensive About Batman