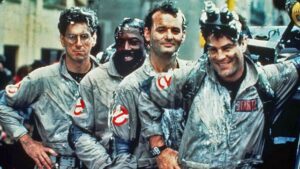 Now that 2015 is upon us, we’re probably not going to get Ghostbusters 3 in ’15, but 2016 could be a real possibility if all goes according to plan. As you probably know by now, it will be an all-female gang of ‘Busters, and Paul Feig (Bridesmaids) will direct.

As Feig has told Collider, he wants the next movie to be scarier than the first, and indeed there were some scary ghosts in the original, which is one reason the makers of ‘Busters were surprised that the movie had such a big following with kids.

This ‘Busters will be a reboot, which Feig feels is the only way to go, and he loves origin stories, so he wants to start fresh. While many feel horror and comedy don’t mix well together, we certainly disagree with that assessment, and feel that Abbott and Costello Meets Frankenstein, Dead Alive, and Evil Dead, to name a few, prove that wrong.

Feig said, “I want ours to be scarier than the original. (Co-writer) Katie Dippold are so focused on wanting to do scary comedy. We don’t want to hold back.”

It would be interesting to see if the next ‘Busters could push the envelope with horror, and maybe it could be a groundbreaker like American Werewolf in London in terms of meshing genres. Whatever Feig decides to do, we hope ‘Busters could not only restore the legacy of Dan Aykroyd’s great invention, but also make a new start for the franchise.

Why So Many Companies Fail at CES

Do We Really Need Rambo 5?