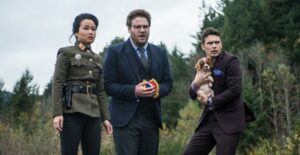 Whenever you hear the term “inside job” these days, it’s often in reference to the 9-11 conspiracy theories, and whenever anyone starts spouting off that nonsense, I feel like smacking them in the mouth. Now reports tell us the Sony hack that held up the release of The Interview may not have been the fault of North Korea, but a possible “inside job” as well.

I often joked that when they catch the culprits behind this whole mess, it will probably be two kids with a laptop. But perhaps it was some disgruntled Sony employees. There’s been a theory that this could be the case, and the L.A. Times reports that the Feds feel North Korea’s responsible, but Norse Corp, a cybersecurity company, said, “We can’t find any indication that North Korea either ordered, masterminded or funded this attack. Nobody has been able to find a credible connection to the North Korean government.”

The Times reports that data from Norse may point to a former employee “who may have collaborated with outside hackers.” The New York Times also reported that this could indeed be an inside job because “whoever attacked Sony had a keen understanding of its computer systems  – the names of the company servers and passwords were all hard-coded into the malware.”

Whoever’s responsible, it’s amazing what insanity all of this caused, and if North Korea wasn’t responsible, iit’s sparked the kind of paranoia we’d normally see in a Twilight Zone episode. (Remember the Monsters are Due on Maple Street?) We’re curious to see if all these cyber experts will get to the bottom of all this, because we’re dying to see who’s behind all this.

Star Trek 3 Has a Release Date