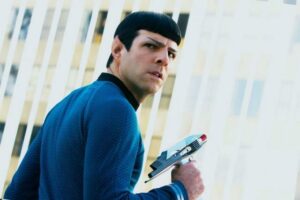 So now that Justin Lin of the Fast and Furious series is now taking over Star Trek, which is great news for Paramount because they want the film out by the franchise’s 50th anniversary. Now Trek 3 has an official release date, and if all goes according to plan they will make the deadline.

Star Trek 3 is now slated to come out on July 8, 2016, and it will apparently come out a week after Steven Spielberg’s next flick, a still untilted spy film, and the reboot of Tarzan, which will be directed by David Yates of the Harry Potter franchise. A week later comes the next Bourne film, which Lin was originally going to direct.

At one point Roberto Orci, who wrote the first two Treks with his partner Alex Kurtzman, was going to direct the third movie, but he bowed out. Games Radar reports they won’t be using the script he used for the third Trek, and a report on Cinema Blend told us that the next flick would take place more in space than on earth, moving away from Into Darkness. (Orci did confirm he’s staying onboard to produce.)

So even if Star Trek Into Darkness didn’t live up to a lot of fans expectations, we know that Trek will continue on and on, whether it’s on TV or the big screen. We saw the franchise resurrected from the doldrums with the Wrath of Khan, and while we’re not crazy about a Fast and Furious alumni coming aboard, if he can give us another great Trek, all is forgiven.

Was the Sony Hack an Inside Job?