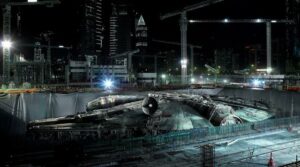 The new year is just around the corner, which means of course there’s more Star Wars news and rumors to cram in before the clock turns 2015.

First off, Robert Iger, the CEO of Disney, is on the cover of Fortune, standing in front of the Millennium Falcon. Iger doesn’t talk much about Disney’s biggest franchise of the upcoming year, along with Avengers Age of Ultron of course, and the title of the story calls the Mouse House the “empire of tech,” pointing to their digital animation wonder Frozen, as well as their relationship with Pixar.

Other than the Milennium Falcon on the cover, there’s precious little about Star Wars in the article, but other Star Wars news includes the report on Screenrant that a Han Solo spin-off movie could be in the future, and reportedly Aaron Paul is being considered for the role. We knew that a Han Solo flick has been rumored for some time, but Aaron Paul taking over the throne? Okay, we know Harrison Ford’s too old to keep doing it, but is Aaron Paul the right guy, if this story’s even true?

Screen Crush also tells us that Frank Oz is returning to the Star Wars universe, this time on Star Wars Rebels as the voice of the great Jedi master. Tune in for the January 5 episode Path of the Jedi, where Oz will speak as Yoda again.

As Dave Filoni, the supervising director of Rebels, told Crush, “What’s great about Frank, by keeping the voice very present and active, you do feel that it’s a watchfulness and that he’s speaking to you from afar. And I didn’t want anyone to think that he had left Dagobah. It was on the outer rim of what we do, but I think we were able to pull it off.”