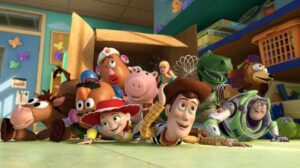 We’ve recently reported that Men in Black and 21 Jump Street may be crossing over into a single movie, and as whacked out nuts as this idea is, there are also now reports that an even more far-fetched idea could have happened…

The Toy Story movies are wonderful, and hey, it’s cool if you dig Transformers, we understand, but do they really belong together? Cinema Blend tells us that the third Toy Story almost took play in Taiwan and was going to include the Transformers.

Apparently the plot was that Buzz Lightyear was going to be recalled to Taiwan, and then destroyed, and the Transformers toys were going to be part of the massive recall. Okay, so the toys wouldn’t have dominated the movie, they would have just been part of the play ensemble, but still, it’s scary to think of this kind of potential cross contamination.

We say keep the Toy Story and Transformers universes separate, please, but if you’d like to see the toys that could have been, check them out at www.jimmartindesign.com. And there will be a fourth Toy Story in theaters on June 16, 2017. They beat the sequel curse of having a good third installment, let’s hope they can make four for four.

A Tribute to the Director of Colossus and The Taking of Pelham 1, 2, 3