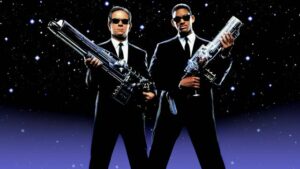 It’s all over the news how the head of Sony, Amy Pascal, and beastly producer Scott Rudin, went to war over the production of the Steve Jobs movie. This is now public knowledge because of the hack attack on Sony that made everyone’s private business at the studio common knowledge.

But one story even more odd coming from the Sony leaks is that Men in Black and the Jump Street series could have come together in a crossover movie. Does this even make sense?

According to IGN and The Wall Street Journal, Sony wants the movie on the fast track for either a 2016 or 2017 release, and IGN tells us “the movie will likely not involve Will Smith and Tommy Lee Jones.” Huh?

Jonah Hill gushed in an e-mail to Pascal, “jump street merging with mib i think that’s clean and rad and powerful.” No big surprise with this next e-mail, the president of production of Sony wrote, “We don’t have a script yet so we’ll be greenlighting the movie off the concept and the talent involved.” Uh oh…

Frankly we’re not sure if either series should keep going, and brining them together probably wouldn’t help either. Men in Black jumped the shark after the first film, and Jump Street is an idea that probably can’t be stretched into any more movies. We get the impression colliding them both together could be a real problem, especially considering they’re greenlighting the concept, and nobody has a script or a good story idea yet. (We wonder if they’ll have one when the movie’s out in theaters.)

Mad Max is Finally Back