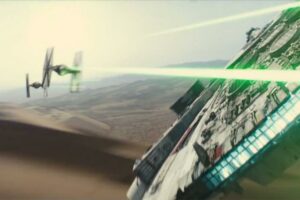 Now that Disney owns Lucasfilm, Star Wars rides at the theme park were a given when George Lucas sold the company. But the real news flash here is that Disney is going to reportedly base the ride on the new Star Wars films, not the old ones.

Variety tells us that Disney head honcho Bob Iger said, “There will be a much larger Star Wars presence in our parks globally. But we want to do this big, which takes time, and to do it right. I didn’t want someone to day, ‘I just saw the movie and there’s nothing in that movie in this (attraction). We waited to see what this film would have in it.”

Now granted, we’re certain the new Star Wars movies won’t be radically different to where we won’t recognize them, and of course JJ Abrams will give us, like Lucas used to say, “hip new stuff.”

As Variety also tells us, there’s an Avatar ride in the works for Disney’s Animal Kingdom, and it will be ready in 2017. With this ride, you’ll be flying on the back of the banshee, and Bob Iger said, “It felt so real, so lifelike,” when he checked out a prototype. “There’s never been anything like it.”

Mad Max is Finally Back