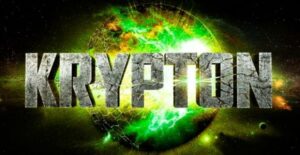 To many out there, myself especially, doing the origin story of Superman is pointless. It’s been done a billion times, we practically know it by heart, and it’s beyond tired already. That said, there’s a new attempt to tell the story of Superman for television, Krypton, and it’s coming to cable next year.

According to the Hollywood Reporter, the show is the brainchild of David Goyer, who did screenwriting for the The Dark Knight trilogy, the Blade series, and Man of Steel, and the show will deal with the years before Superman was sent to earth.

As the Reporter tells us, the series “follows the Man of Steel’s grandfather as he brings hope and equality to Krypton, turning a planet in disarray into one worthy of giving birth to the greatest Super Hero ever known.”

This is obviously in response to the show Gotham, which is not the origin story of Batman, but how his enemies came to power and how James Gordon moved up in the police force, which is a much different prequel story. Ian Goldberg from Once Upon a Time is writing the screenplay, and he and Goyer created the show together.

So we know the Superman origin story in a nutshell, everybody does. Can Krypton add more to it? We’ll find out next year when Krypton debuts on Syfy.