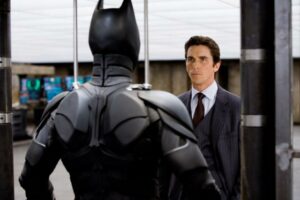 Christian Bale is playing Moses in the Ridley Scott film Exodus, but you also know when he’s giving interviews that one of his best known roles, Batman, will come up. Hard to believe it’s been over two years now since the Bale / Nolan trilogy has ended, and both have moved on to other things.

So now that Batman’s far in the rear-view mirror, Bale made it clear that he’s glad the last movie’s ending is open ended. “Alfred was just content with me being alive and [away from the Batman life],” he told Collider. “Because that was always the life that he wanted for him. I find it very interesting and, with most films, I tend to always say it’s what the audience thinks it is. My personal opinion is no, it was not a dream. That was for real and he was just delighted that finally he had freed himself from the privilege but ultimately the burden of being Bruce Wayne.”

Bale also told IGN that while Batman “could have kept on going and going and going, it was right for Chris to finish it where he did. It was appropriate to leave at the right time.”

Of course the subject of Batman Vs Superman came up, and Bale said, “When I heard there was someone else doing it, there was a moment where I just stopped and stared into nothing for half an hour.” Bale and Nolan have made it clear they’ll never go back to Batman, and that their trilogy was pretty self-contained. “Ours doesn’t belong in any other version at all.”