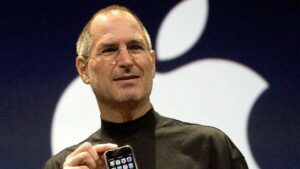 Trying to get a movie made is difficult under any circumstances, and the road to the big screen is often very rocky. Take the Steve Jobs biopic at Sony, which has already lost one major leading man, Christian Bale, and at least one major director, not to mention the studio that bought the rights to Steve’s life in the first place, Sony.

Recent reports tell us that Seth Rogen may be playing Steve Wozniak, and now Jeff Daniels is up for the role of John Sculley, the former CEO of Apple. This makes sense, because Daniels is the star of the Aaron Sorkin series The Newsroom, which is now off the air, leaving Sorkin and Jeff plenty of time for other things.

According to the Wrap, the deal for Michael Fassbender to play the title role of Jobs himself is a done deal. The site also mentioned that Daniels is director Danny Boyle’s #1 choice to play Sculley.

In other Jobs news, the cyber attack on Sony has not only thrown the studio in chaos, but it also revealed nasty e-mails in regards to the Jobs movie, which is being produced by the notoriously volatile and unpleasant producer Scott Rudin. In arguing with Sony chief Amy Pascal, Rudin was furious David Fincher was going to do a Cleopatra movie with Angelina Jolie, who he called a “minimally talented spoiled brat.”

You can read the whole sorry saga on Gawker if you want to see the e-mail trail of executives trying to get the Jobs movie off the ground, which we’re sure it still will once the brats quit fighting in the sandbox. (And you thought Jobs himself was a piece of work.)

That’s a Wrap on Ant-Man

Christian Bale Looks Back on Batman