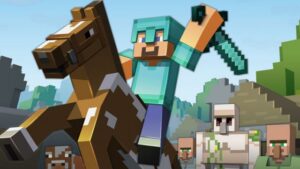 As regular TG readers know, a movie can go through a lot of cast members and filmmakers before it finally gets made, if it ever gets made at all. You report one person’s involved one minute, the next they’re off the picture.

So it looks like the big screen version of Minecraft now needs a director, because Shawn Levy, helmer of the Night at the Museum movies, has just left the project.

According to Variety, Levy and the Miencraft screenwriters, Kieran and Michele Mulroney, met with the Minecraft people with their ideas for the movie, but there’s apparently creative differences. Warner Brothers is still high on a Minecraft movie, and hope to have a new director for it soon.

We’re not exactly sure how you can do a Minecraft movie, we’re thinking a Lego style family flick could be a good way to go, or a Pixar style movie could work as well. Could a live action Minecraft movie actually work? We’ll see if Warners can get it up and running again soon.

Christian Bale Looks Back on Batman