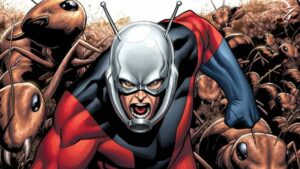 It’s been a rocky road for Ant-Man, but at about the same time that Batman Vs Superman wrapped production, Ant-Man has also completed principal photography.

Originally Edgar Wright was going to direct the Marvel adaptation, starring Paul Rudd, but he departed because of creative differences. The impression you got was that Marvel’s a brand and they didn’t want anything that veered too far from it. (According to Variety, Wright had been with the project since 2006.)

Wright has been replaced with a director who’s clearly more malleable, Peyton Reed, who also helmed Bring it On, The Break-Up, and Yes Man. Is this the right guy for a superhero movie?

Ant-Man is due to hit theaters on July 17, 2015, and we’re curious to see how they’re going to pull this one off. It’s one thing having big strong superheroes, but here the guy’s gonna be tiny. In the right hands, it could be a very nice change of pace, showing that it’s not the size of the ant in the fight, but the size of the fight in the ant.