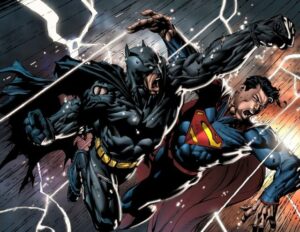 Batman Vs Superman is of course one of our favorite whipping boys here on TGD, but we’ll still have news on it from time to time because it is a major genre title, and who knows, maybe it will wind up a good movie after all.

While we figured production was already wrapped up by now, Collider tells us that the shoot for B V S has officially wrapped production. While we doubt its post-production will be anywhere near as lengthy or complex as Star Wars, it’s still due for an early 2016 release, which should give everyone plenty of time to get things ready.

As we all know by now, Wonder Woman is in the film, and Jesse Eisenberg will be playing Lex Luthor. Aquaman will also be in the movie, as well as Cyborg. Jena Malone is rumored to be playing a female version of Robin, but this is unconfirmed.

Production began for B V F in April, making this a nine-month shoot and as we just mentioned, we’re certain there will be a lengthy post-production period. Batman Vs Superman: Dawn of Justice, will be hitting theaters on March 25, 2016.