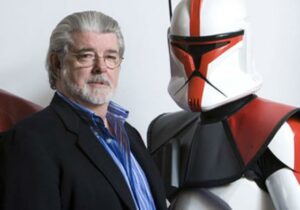 While there’s always going to be troll complaints, it seems that for the most part, the fans are very happy about the trailer for Star Wars: The Force Awakens. The real question is, what does George Lucas think?

Yeah, yeah, we know what you’re saying, who cares what he thinks, he put the franchise in the toilet, but it’s also a given that Lucas would look over J.J. Abrams’s shoulders a little, and Abrams actively sought out his advice as well.

The commentary from both Lucas and Anakin’s dobblegangers is very good, even playing into the light saber controversy, and it’s an enjoyable parody, one of many we’re sure will be hitting the net until The Force Awakens hits theaters December 18, 2015. As for Lucas’s real reaction to the trailer, even with all the geek hate out there, we’re still curious to hear what he really thinks when he’s ready to talk.