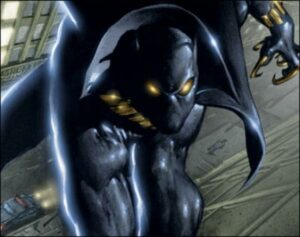 There’s been a lot of superhero action out in the world these days, especially with the release of Avengers: Age of Ultron just around the corner. Here’s the latest on the adaptations of Jessica Jones, Black Panther, and Deadpool.

Jessica Jones is one of five superhero series that will be on Netflix, and The Hollywood Reporter tells us that Krysten Ritter has won the lead role. The Netflix series will have one major Marvel character, Daredevil, and several lesser known characters including Iron Fist, and Luke Cage: Hero For Hire. (The Hollywood Reporter tells us these series will culminate in a mini-series, The Defenders.)

Deadline also tells us that Ryan Reynolds is closing in on his deal for a Deadpool movie at Fox. The X-Men franchise is still going very strong, and Deadpool is obviously another character that will go in and out of the universe. (X-Men: Apocalypse will be released on May 27, 2016.)

We’re also looking forward to The Black Panther, because it’s nice to see the bruthas representing in superhero stories, another reason we’re looking forward to Luke Cage. Chadwick Boseman, who will play the Black Panther, “I’m beyond excited. I think the great thing about it is that this actual character is unique in a lot of ways. I can’t think of another character that’s like the leader of a nation and is a superhero at the same time.”

The Black Panther may also make an appearance in another superhero film before headlining his own. Boseman added, “There’s a director on the movies that I’m introduced, but not for Black Panther…just being a part of that discussion is huge.”