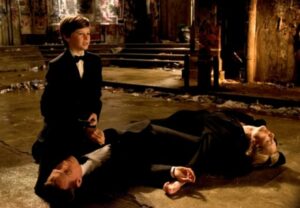 We’re not crazy about Batman Vs Superman, but the train has left the station on this one, and there’s just no stopping it, so we’re still hoping for the best. Now reports are out there that a famous scene in Batman iconography will be recreated again, this time in Imax.

As the Hollywood Reporter reminds us, this moment in Batman’s history was also recreated on the show Gotham, with the subtext that this could get a bit redundant here, much like rebooting Superman. We know Batman lost his parents as a young boy, and this is why he dedicated his life to fighting crime, just like we know the whole story of Superman being sent to earth as Krypton was about to explode, etc.

The Hollywood Reporter calls Bruce Wayne’s parents dying “Stairway to Heaven” in that “it’s the iconic thing that everyone seems to do their own version of, no matter how unnecessary that might be.” The subtext here also makes us think of another term that applicable to so many movies in modern times: Movie karaoke. (Not to mention this kind of stuff feels like a joke we’ve heard a million times that’s lost its punchline after too much repetition.)

Batman Vs Superman, which also features Aquaman and Wonder Woman, will be in theaters March 2016.

Will Christoph Waltz Take On Bond?