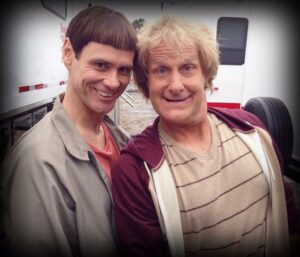 It’s been nearly twenty years since The Farrelly Brothers unleashed Dumb and Dumber, and it’s still a beloved comedy to this day. Now Jim Carrey and Jeff Daniels are back, but will the world still embrace them and laugh at them like before?

It is indeed odd seeing Jim Carrey in his fifties with that haircut, or Jeff Daniels with that hair when he’s pushing sixty. As Daniels told Esquire, Dumb and Dumber To was going to come out in the summer, but then the powers that be decided to move it closer to the anniversary.

The fan base grew and grew, “And I think that’s what drove the sequel,” Daniels said. “The response at five years later, 10 years, 15 years later. And people of all ages, not just teenage boys, coming up and going, ‘That movie! I watch it every time it’s on. I’ve rented the DVD, I’ve worn it out.’”

Daniels also feels Dumb and Dumber is the perfect escape from the scary realities of the world. “Maybe because there’s so much fear, because the world is so complex and dark and the economy isn’t great – there are a lot of things to be scared of. Here’s a place you can go for 90 minutes to get away with that.”

Official reviews aren’t in as this story was being finalized, but we do indeed hope that the Dumb and Dumber team can deliver again.

World of Warcraft Movie Shaping Up