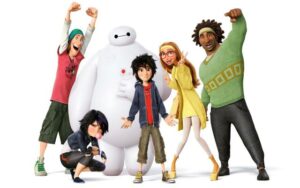 So Big Hero 6 is out in theaters, it’s gotten mostly very positive reviews, and audiences seem quite delighted in this cute, inflatable robot who is programmed to heal, and who becomes part of a superhero when push comes to shove.

Some reviewers feel this is what happens when Disney meets Marvel, an Avengers style team for the family, and Baymax the robot was a big key to the film’s family friendliness. As the film’s writing / directing team Chris Williams and Don Hall told Creative Screenwriting, the inspiration came from inflatable robotics, which they discovered when they visited Carnegie Mellon.

“For us, it was important that we do something that you’d never seen before,” Williams said. “He had to be appealing, and the term ‘huggable’ kept coming up. ‘Gotta find a huggable robot.’ I met a researching who was working in soft robotics. He had a very crude arm that was vinyl, and it was inflatable. The practical application for it was in the healthcare industry. This inflatable technology was so new, I had never seen anything like it, and I felt like we’d found our huggable robot. Baymax’s persona, his personality, his design, it all came from that research trip.”

“That Baymax is the antithesis of the typical superhero really worked in our favor,” Hall adds. “To take this balloon that only wants to help people, it could be easily popped, it’s hard to imagine how he’d ever become the hero that our main character wants him to be. When he’s armored up, it’s a big part of the comedy and the fun of the movie, but his personality doesn’t change. He remains this loving, attentive caregiver, and that remains his greatest strength.”

As of this writing, Big Hero 6 and Interstellar are currently neck and neck in the box office race, and some reports have it coming in on top. Interstellar is certainly a more challenging movie, especially on your kidneys because it’s three hours long, and maybe a soft, huggable robot could come out the winner. After all, audiences always love to root for an underdog.

The Osbournes to Return

World of Warcraft Movie Shaping Up