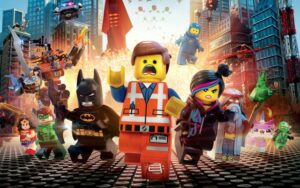 The Lego movie was a huge hit early this year, so it’s no surprise to learn there’s a sequel in the works. Warner Brothers is loading up on franchises for their future, including DC comics adaptations, the return of Harry Potter, and Lego is certainly another big franchise for the studio as well.

The Hollywood Reporter tells us that Phil Lord and Chris Miller, the writing / directing team behind the first Lego flick (as well as 22 Jump Street) will be back for the next one. On the decks for the Lego franchise include a Nijago movie opening on September 23, 2016, and a Lego Batman flick which is coming in 2017. Also on schedule are two Lego films for 2018 and 2019.

While we’re sure the upcoming Lego films will do well, we think the big one at the box office will be the official follow up to this year’s Lego film. It’s always important to get the original creative team behind a hit movie back for the follow up, and we’re glad to see that Lord and Miller are back to bring more Lego fun to the big screen.

The Lego Movie sequel is currently slated for a May 26, 2017 release date, the same year the Batman Lego movie will be in theaters, and as we all know, Memorial Day weekend is prime blockbuster time for a movie to succeed.