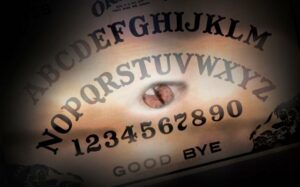 If you recall some time ago, Hasbro made a deal to make movies out of many of their board games into movies. After the disaster of Battleship, that deal fell apart, but Ouija was also part of that deal, and it actually made it to the finish line.

So what’s the final verdict? Like a lot of modern horror movies, the end result is pretty much one big meh. Variety called it “routine but decently atmospheric,” while the Hollywood Reporter advises us to “play the game instead.” The Onion called it “professionally produced by completely uninspired…The story formulaic to the point of laziness, with events unfolding seemingly because that’s what’s supposed to happen in a horror movie.”

As Battleship and Clue have proven, making a movie out of a board game is hard, although the proposed version of Monopoly with Ridley Scott directing sounded intriguing. With Oujia on the verge of release, reports have hit the net that Hasbro wants to take more control over their next planned movie, My Little Pony, which is actually a hot property with the whole Brony phenomenon going on.

Back to the Future to Get Live Orchestra Screenings