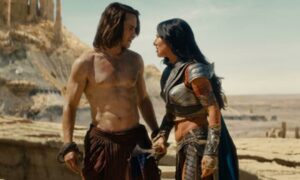 John Carter was the first live action movie directed by Andrew Stanton, who gave us the Pixar classic Finding Nemo. John Carter was also a spectacular flop, one of the biggest in recent memory. Which is not to say that it doesn’t have its fans who would love to see it become a franchise one day.

Now Collider tells us the rights for John Carter have reverted back to the Edgar Rice Burroughs estate, which means there could be another John Carter flick again one day, but it’s certainly got its work cut out for it. It’s very hard for a franchise to overcome a bad name, which is why my hopes of a Howard the Duck reboot may never come to pass, and why we probably won’t see another Lone Ranger movie for at least another thirty years.

Yet as the Burroughs estate said in a statement, “We will be seeking a new partner to help develop new adventures on film as chronicled in the eleven Mars novels Burroughs wrote. This adventure never stops.” The statement hinted that Warner Brothers could be a food place for John Carter because they currently have the rights for Tarzan.

There’s also apparently a script in the works for another John Carter, Gods of Mars, and with everything being rebooted these days, sometimes twice within a decade, maybe Carter will be given another chance.

Avengers Age of Ultron Trailer to Play Before SHIELD Next Week

Another Promise of a Hoverboard