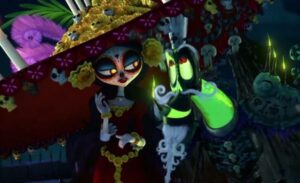 Guillermo Del Toro has a lot of projects set up, and he’s now in animated Tim Burton territory with The Book of Life. The verdict?

Apparently Del Toro’s produced a winner with a special Latin flavor. After all, how many animated movies have dealt with Dia de los Muertos? The Wrap has called it a “vibrant animated tale,” Good Morning America News calls it “adorably macabre, nostalgic fun,” and Forbes tells us the movie “celebrates [the] day of the dead in high style.”

A CGI animated movie like this is a really nice change of pace, and it’s nice to see the Latin traditions of the Dia de los Muertos getting a Pixar style movie for the family. Providing the voices for The Book of Life are Diego Luna, Zoe Saldana, Channing Tatum, and Ron Perlman, among others.

DC Comics Playing Catch Up at the Box Office With Marvel