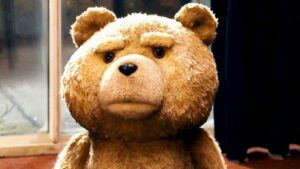 It would be pretty funny if Ted, the loveable, foul-mouthed teddy bear, made an appearance at Comic-Con. Of course, it would have to be a puppet, and maybe Seth MacFarlane could have him sitting next to him, a la Jim Henson, to take questions from fans.

Well as it turns out, Ted will be coming to Comic-Con, but it’s to shoot a scene for the upcoming sequel, Ted 2. According to IGN, Ted’s Comic Con appearance will be shot at the New York Con, and rumor has it William Shatner will have a cameo in the film, possibly playing himself at a fan convention.

The idea of Ted and William Shatner making hilarity at Comic Con is too delicious a concept to resist. There’s been rumors running wild that Shatner may have a cameo in Star Trek 3, but going head to head with Ted could be a hell of a career culmination as well.

We can only imagine what kind of jokes MacFarlane can come up with when Ted meets the geeks, and we have the feeling it will really hit a nerd with many of us genre fans, which is just how he’ll like it.

The Flash is Apparently a Winner

I hate playing Whack-a-Mole with ads!