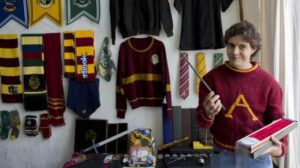 The last Harry Potter film came out in 2011, but there’s still other Potter related projects in the works. The fans seemed to accept that the story was done, and the Potter fandom should go on for a long time to come.

Now as Entertainment Weekly tells us, a professor from Mexico has just broken the world’s record for most Potter memorabilia. How many pieces? 3,097 to be exact. This blows away the previous record holder, who only had 807 pieces.

The man who has the Potter piece record is Menahem Asher Silva Vargas, and according ot the Guardian, it’s taken him 15 years to gather all this stuff. It takes up two rooms in his home, and it includes everything from Harry’s trademark scarves, to brooms to toys to magic wands.

The Most Expensive Items in Gaming