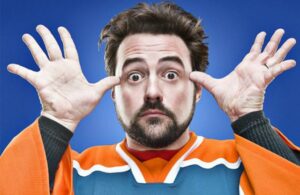 While we thought Kevin Smith was soon going to retire to lead a life of leisure, let’s face it, food and weed are expensive. And when making movies goes well, maybe you want to keep going and make more because it can often be fun.

You get the impression Kevin Smith has a lot of fun when he’s making movies, except when he has to work with Bruce Willis, and his latest, the odd thriller Tusk, has apparently given him enough money to go ahead with a third Clerks installment.

Smith is claiming Tusk is a success, although it hasn’t made that much money yet, and as Smith told The Wrap, “A year and change ago I was desperately trying ot get Clerks III made for the 20th anniversary and that desperation – I must have reeked of it because I couldn’t f*cking find money and sh*t. But it was Tusk, people going ‘Holy f*ck, what else do you have, and I was like Clerks III and they’re like ‘done.’ So, everybody that’s like, ‘He failed, he failed,’ I’m like ‘Thank you, I failed into doing Clerks III.”

We’re much more excited about a third Bill and Ted actually, but we’re also glad Kevin Smith is back making movies. The first Clerks was very clever, and in many places completely hilarious, and Chasing Amy was terrific too, so we’ll give Clerks III a fair shake.

Interstellar’s Gonna Be a Long Trip