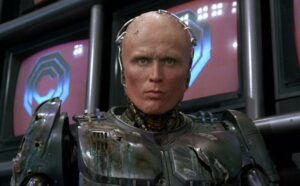 We were very against the remake of RoboCop because the original is still a good flick, and trying to follow it up never worked. We’re so enamored with the original, it’s also hard to imagine anyone else besides handsome, blue eyed Peter Weller in the role.

Weller of course is on Sons of Anarchy, and you probably know he’s got a Ph.d as well. Not to mention the irony of playing a dirty cop on SOA, and he told Vulture, “I felt so organic to the show.” It’s not the first time Weller’s played a rouge cop either, he played the same kind of role on Dexter.

Vulture asked Weller if he ever felt playing Peter Murphy, aka RoboCop, ever held him back. “Nothing has ever held me back,” Weller said. “Ever. Certainly not that role. That’s a brilliant movie. I was really fortunate to be a part of it.”

Weller also admitted he did RoboCop 2 for the money. “It was a pretty good film, but I was done with it.”

Not to mention there’s still talk of another Buckaroo Banzai movie one of these days. “It’s just a unique flick. Humphrey Bogart said you’re lucky if you make two or three movies that outlive you, and I hope I’ve done that.”

The Last of the Clone Wars

Self-censorship on the Internet