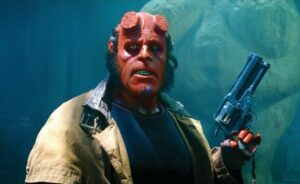 Ron Perlman is a remarkable actor who’s been around for a long time. Long before Hellboy, he was the star of Beauty and the Beast, and he’s also starred on Sons of Anarchy, among many other movies and TV series.

Now Perlman’s telling his life story, with the wonderful title Easy Street (the Hard Way), which will be published by Da Capo Press on September 30. (Guillermo Del Toro, who cast Perlman in the leading role in Hellboy, wrote the introduction as well.)

Like the title tells us, it’s a rags to riches story about a man who definitely didn’t look like a traditional actor, but he came through and became a star in his own unique way. Being an actor is never easy for anyone, and Perlman had a tough journey as well, which we’re dying to read.

While I haven’t met Perlman, from what little I’ve been able to gather he’s a good guy, and he did an incredible act of kindness by becoming Hellboy for Make a Wish because an ill child wanted to hang with Hellboy for a day. Gotta love a guy like that.

Is Apple’s Beats Going Out Of Business?