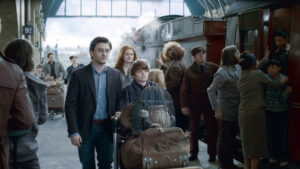 “The scar had not pained Harry for nineteen years. All was well,” were the last lines of the final instalment of one of the most popular cycle of stories ever seen, but did it remain that way for Harry Potter and the wizarding world, or did he still have some further trials to undergo?

When we bade goodbye to Harry Potter and his friends, now all grown up and with Hogwarts-going children they had come to drop at Platform 9 3/4 (Nine and Three Quarters), there would hardly have been a Potterverse fan who had fervently wished the adventures continue.

And JK Rowling, despite her firm refusal then to continue and branching off into other story arcs, has been kind enough to reconsider, though not the way we would have expected.

JK Rowling with the cast of the play. (Photo Courtesy: Hypable.com)

In size comparable to the earliest of the series, not the massive doorstoppers we’ve been seeing since “The Order of the Phoenix”, the new story is, however, a script, not a novelisation of the play, which debuted in London on 30 July.

But even all that pales into insignificance for fans as the story resumes from where it had ended on that hidden platform at King’s Cross Station and moves in an unexpected direction.

As Potter fans will recall, that particular see-off saw Harry Potter’s second son, Albus Severus, going to Hogwarts to begin his magical education, and worried about getting sorted into the proper house.

Also accompanying is Rose, the daughter of Ron Weasley and Hermione Granger.

“Harry Potter and the Cursed Child” brings back almost all the major characters of the franchise, however a few of them appear in an unconventional form. (Photo: IANS)

But, in this story, this is from where things get different. Rose, as organised and bossy as her mother, suggests they be careful of the friends they choose as everyone will approach them. Albus, however, chooses to befriend a boy they find in the first otherwise empty compartment they come to, despite her marked disapproval for this boy is Scorpius, son of Draco Malfoy.

And further, Albus gets sorted into Slytherin, and proves to be dud at flying on broomsticks. All this creates a certain distance with his father, who is anyway embroiled with reports that many of Voldemort’s former supporters are gathering.

There are rumours about the parentage of Draco Malfoy’s son, one surviving Time Turner is unearthed, and an old and enfeebled Amos Diggory pleads it be used to retrieve his son Cedric (remember the Hogwarts’ original Triwizards competitor in “The Goblet of Fire”?).

What happens when Albus steals the Time Turner and sets out to save Cedric? What does Cedric’s cousin Delphi actually want? Why is Harry getting nightmares again and his scar hurting? Can you change the present and future by changing the past? And can skill in magic help you in your relations too?

All these questions (and their answers) form the crux of this story, bringing back almost all the major characters–though a few appear in a rather unconventional form–and all are true to type, save a few who either undergo a surprising metamorphosis or turn out contrary to expectations.

Despite its unconventional format, the latest Potter adventure, or rather Potter and son adventure, which needs a familiarity with the earlier stories, will satisfy the most ardent fans who will not only come to know what happened next but also what could have also happened earlier. They will also wish they could say “Accio” to summon it.

(This article has been published in arrangement with IANS)

Track Yourself "Stay In The Loop"