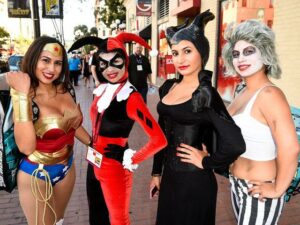 Every year, Comic-Con comes to San Diego, and it’s always a major geek event. But there have been major changes that have been going on with the upcoming ‘Con, and they’re reflecting the big sea change that’s going on with storytelling in general, where there’s better writing on TV than in theatrical films.

As Variety reports, Sony, Paramount, and Marvel won’t be appearing at Comic Con this year, and Marvel’s absence is a big shock. (The last time Marvel didn’t come to Comic Con was 2011.) But as the industry trade reports, these studios don’t have “enough fanboy material to promote.”

Warner Brothers, however, will be there, because they own DC, and DC has been struggling to keep up with Marvel at the movies. Variety also reports that TV will be a major force at ‘Con this year, because superheroes are going to be on TV strong this Fall with Supergirl, and genre TV like Game of Thrones and Walking Dead keeps getting stronger.

And of course, the big 800 pound gorilla at ‘Con this year will be Star Wars The Force Awakens, which will be on the big stage on July 8. It’s odd to think of there not being “enough fanboy material” to bring to Comic Con, but again, it’s great to see so much great geek TV out there, to the point where it’s changed the focus of the convention. We’re especially looking forward to the Star Wars revelations that will hit this July.

6 companies that let technology empires slip through their fingers