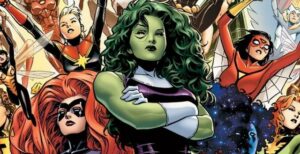 We’re now only four months away from Avengers Age of Ultron, which along with Star Wars The Force Awakens, should be the biggest movie of the year. Now Marvel is launching an all female version of The Avengers, A-Force, which is arriving in May.

As the L.A. Times tells us, writer G. Willow Wilson, who also writes Ms. Marvel, said in a statement, “We’ve purposefully assembled a team composed of different characters from disparate parts of the Marvel U, with very different power sets, identities and ideologies.”

This is part of Marvel’s new rebooted universe, which will launch with the Secret Wars series in May. The statement promises, “Beginning in Marvel’s Secret Wars, the Avengers are no more…a brand new team will lead the way. There came a day, a day unlike any other, when Earth’s mightiest heroines found themselves united against a common threat. On that day, A-Force was born – to fight the foes no single super hero could withstand.”

So will A-Force be a new comics powerhouse, or is it just a gimmick? We’ll know for sure in May when it’s unleashed on the world.

Can Will Smith Come Back From After Earth?

Fifty Shades of Grey Reviews Are In