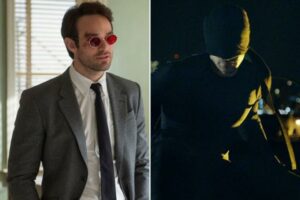 Finally, Daredevil will get its long awaited reboot, thanks to Netflix, and perhaps it’s better to do it as a TV series instead of putting all the chips on a big bet like a big screen movie.

The Wrap tells us the show will premiere on April 10, with Charlie Cox (Boardwalk Empire) in the title role. A tiny teaser trailer has just debuted, with a longer trailer to debut on February 4. You don’t see a heck of a lot, just Cox in a basic, black Ninja style outfit, telling us, “I’m just trying to make my city a better place.”

As we’ve seen many times in superhero stories, the first costume is often pretty basic and thrown together, and we should see the full-blown thing several episodes in.

This series, which is the first of Marvel NetFlix series, will be thirteen episodes long, and it also stars Vincent D’Onofrio as Kingpin, along with Rosario Dawson, Elden Henson and Deborah Ann Woll.

In other Marvel news, Carrie-Anne Moss will be in Jessica Jones, another Netflix Marvel series in the works, along with David Tennant (Dr. Who), who’ll be playing the villain.

The Agony of the Lego Movie Losses