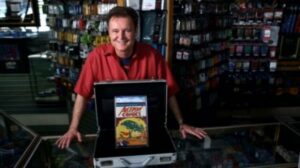 Who among us has the kind of money that can buy the first issue of Superman? The most valuable comic in the universe, a pristine copy was even just sold on Ebay for $3.2 million, and there was even a comedy in the works about Nicholas Cage’s copy being stolen from his mansion.

Yet as the Daily Beast reported, a copy of this holy relic “sat almost unnoticed” at the New York Comic Con. It was at booth 2630, which was occupied by Metropolis Comics. It was the copy purchased off Ebay, and the owner of Metropolis had “undercover security” watching things, to make sure nobody tried to make a five finger discount.

As the Beast tells us, two hundred copies were printed when it debuted in 1938, there’s only a hundred left, and two are in mint condition. And there it was, with a 9.0 rating sticker on it at Comic-Con on display. After Comic Con, it was taken off to a bank vault in New York, which only Superman himself could probably penetrate.

The Beast was shocked more people didn’t freak at seeing the most valuable comic book in the world, but as one of the guards said, what can you do with it once you steal it? Like stealing any great work of art from a museum, you can’t sell it on Ebay, or anywhere else really. And maybe it didn’t phase anyone at Comic Con because only the big pimpin Hollywood people on the panels had the resources to buy it.

Welcome Back to Westworld