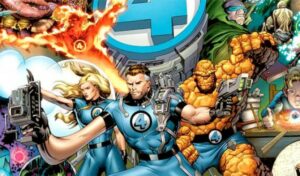 However it turns out, good, bad or indifferent, the cinematic reboot of The Fantastic Four is coming to theaters on August 1, 2015, and we sure hope it’s going to deliver this time. At the same time comes the odd news that Marvel will be cancelling the comic books before the movie hits screens.

Deadline reports that that the news came at New York Comic Con, and there could be several reason why this is happening. You would think Marvel would want the series tat the newsstands and online when the movie comes, and this could boost sales, no?

Well, reportedly the comic hasn’t been selling well, and there’s also speculation Fantastic Four characters could be in the next Avengers movie. So why cancel the comics when they could be making a big screen comeback?

The Hollywood Reporter tells us this could also have to do with Fox owning the big screen version of the Four, with one source claiming, “the belief inside the higher echelons of Marvle is that promoting these properties in comics only benefits Fox’s movies at the expense of those from Marvel Studios.”

Perhaps there will be a relaunch with the movie, after all we’ve seen comic characters die and be reborn before, and maybe the movie can help bring the four back.