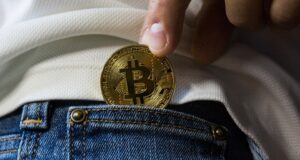 For most of its existence, Bitcoin has been set up in opposition with the banks which the digital coins have the potential to spend. On one side, there is Bitcoin, which by its very nature requires no third party to handle transactions using the coins. On the other, there are the banks, which act as the third party in financial transactions. Of course, they are going to be at odds. Yet Bitcoin could use the stamp of approval from banks and other financial institutions to really reach its full potential. And banks could position itself as more modern and forward-thinking if they incorporate the technology behind Bitcoin in their everyday operations. The two diametrically-opposed entities could easily come together.

The question is whether or not it would be in the best interest of Bitcoin to make that kind of capitulation to financial tradition. After all, the people who first became involved in Bitcoin could easily be turned off by the concessions to the establishment. And perhaps Bitcoin’s greatest potential lies in the possibility of it replacing other forms of payment and the institutions behind them, rather than coming to terms with them. It all makes for interesting hypothetical scenarios for investors, many of whom can take advantage of the rising value of the coins through an investment trading program along the lines of Bitcoin Loophole. Here are some of the pros and cons for Bitcoin as it does its tentative mating dance with big financial institutions.

Bitcoin thrills people who like the idea of having absolute financial autonomy, forgoing all reliance on the big banks and credit card companies. Once Bitcoin comes to some sort of agreement with those banks, perhaps to facilitate storing the coins with the banks, that autonomy will essentially have disappeared. And it could lead to an exodus by those who picked up on Bitcoin in the first place.

Banks and credit card companies are not about to give up their standing in the world of personal finance without a fight. They are not going to sit back and let the Bitcoin train simply steamroll right over them. Instead, they will likely use all of their political connections to squash Bitcoin should it come down to an either/or situation. Bitcoin can avoid all of that by striking some sort of agreement with the banks to coexist peacefully.

It seems like the banks and Bitcoin will continue to keep each other at arm’s length for a while. But the technology behind Bitcoin is simply too sound for the banks to overlook. Meanwhile, Bitcoin also must realize that complete eradication of banks other financial behemoths are unlikely to happen anytime soon. Look for incremental steps towards a thaw in this once-frosty relationship.

It’s hard to say what the near future holds for banks and Bitcoin. Down the long road, however, some sort of uneasy truce will likely be in the offing.

What is a variable frequency drive?

6 Things You Need to Consider When Expanding Your Business